Skin problems? Get treated by the experts.

Vitiligo is a common condition in which the skin loses the pigment that determines its colour. It is also known as leucoderma (leuco = white; derma = skin). Vitiligo is characterised by irregular, pale or milky white patches on the skin. 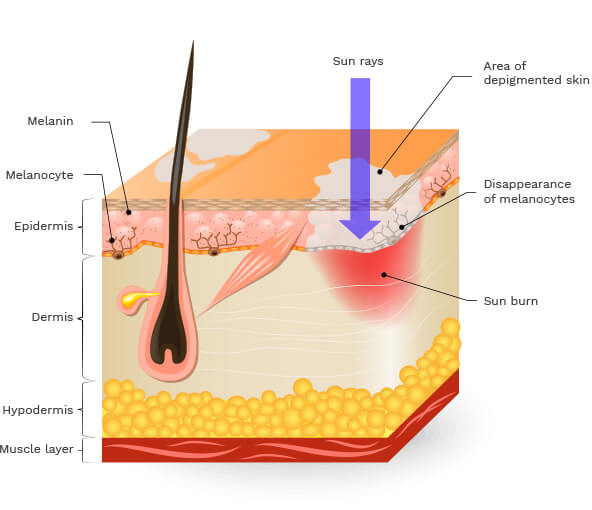 A pigment called melanin imparts skin (and hair) with its native colour. This pigment is produced in cells called 'melanocytes'. When melanocytes die or are unable to function, it results in the loss of melanin, causing colourless, white patches on the skin, leading to vitiligo. Note that every off-white or white patch on the skin is not vitiligo. There are many other causes of white patches, namely, fungal infection, birthmarks, inflammatory conditions of the skin, etc. Vitiligo is just one of the causes of white skin patches.

Vitiligo is a chronic disorder, and it tends to run an unpredictable course. It affects up to 1% of the global population. People of different races, religions, ethnic groups, socio-economic groups and with different dietary habits are affected by this condition.

Vitiligo affects males and females equally, and it is commonly seen in children as well. The incidence is higher in children when both parents are affected by vitiligo. Usually, people develop it between age 10 and 30, and almost all do so before the age of 40.

The first symptom is white patches on the skin. These are generally found on sun-exposed areas of the body - hands, feet, arms, face and lips. Other areas for patches may be armpits, groin, mouth, eye, nostril, navel, genitals and rectum.

The scope of homeopathic treatment for vitiligo extends beyond the physical symptoms, and the approach is more holistic in nature. It also addresses the underlying conditions of mental stress and depression that are seen in many cases, to help patients be re-integrated into normal life.